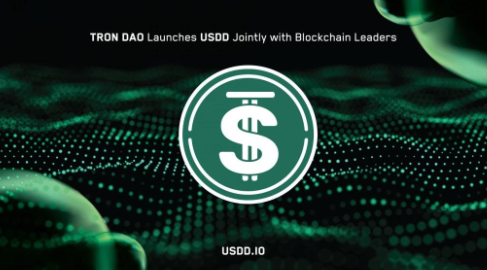 On May 5, Justin Sun, Founder of TRON, announced on Twitter that the TRON DAO Reserve rolled out a decentralized stablecoin named USDD, which has so far been listed on Sunswap, Sun.io, Curve, Uniswap, Ellipsis, Pancakeswap, Kyberswap, etc., with an initial total supply of one hundred million.  Through the cross-chain protocol BTTC, both of the circulating supply on Ethereum and BSC are near twenty million. 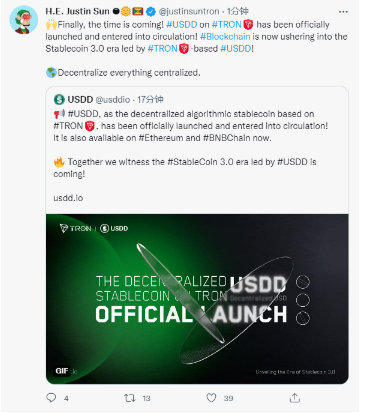 USDD is a decentralized algorithmic stablecoin launched collaboratively by the TRON DAO Reserve and top-tier mainstream blockchain institutions. The USDD protocol runs on the TRON network, is connected to Ethereum and BNBChain through the BTTC cross-chain protocol, and will be accessible across more blockchains in the future. USDD is pegged to the US Dollar (USD) through TRX and maintains its price stability to ensure users have access to a stable and decentralized digital dollar system that guarantees financial freedom. The website of USDD is now online (http://usdd.io). The contract address shall be subject to the announcement on the official website. The addresses of Tron, Ethereum and BSC are:

Back on April 21, Justin stated in an open letter that TRON DAO, the world’s largest decentralized autonomous organization, will join hands with major blockchain players to establish the TRON DAO Reserve and issue the decentralized stablecoin USDD, making finance accessible to everyone by leveraging mathematics and algorithms.

According to the openly available sources, USDD will first be issued in the TRC form on the TRON network. The TRON DAO Reserve will issue USDD and manage its reserves in an open and transparent manner. USDD resolves short-term price fluctuations and cyclical price risks with its flexible monetary policy and minting mechanism. The USDD protocol is committed to meeting consumers’ demand for stable digital currencies, allowing them to make e-payments with USDD. To this end, the USDD protocol will be pegged to USD, the most widely applied fiat currency globally, to establish a stable, decentralized, and tamper-proof USDD-USD system at users’ disposal.

According to an industry insider, USDD’s bringing finance to all is another pioneering vision in digital finance after the Libra plan in 2019. Libra tried to launch stablecoins to get a leg up in digital finance and to realize that, it adopts blockchain technologies. However, compared with Bitcoin, Ethereum, and other cryptos, Libra still had room for improvement in credit guarantees, asset reserves, and liquidity (supply limit)—the Libra Association, consisting of 27 founding members, was dissolved after operation for a couple of months.

With apparent strengths in trading and settlement, USDD outshines Libra, which is dead before it was ever born.

To start with, USDD’s decentralized DAO system ensures its value stability. TRON has grown into the world’s largest stablecoin network, hosting over $55 billion worth of stablecoins and financial assets, and has settled and cleared total financial assets of over $4 trillion. The TRON DAO Reserve aims to guard the overall blockchain industry and crypto market, mitigate severe and long-term downturns, and prevent panic trading caused by financial crises. The TRON DAO Reserve will be able to effectively stabilize the financial market of the overall blockchain industry and keep its systematic risks in check.

Moreover, the algorithm-based price feed system guarantees the price stability of USDD. USDD addresses challenges facing algorithmic stablecoin on three fronts, namely, scarcity (inflation and deflection), arbitrage mechanism design (a two-way arbitrage mechanism), and the multi-token model (transfer of volatility). First, the USDD price oracle is provided by Super Representatives on the TRON network, who need to submit a vote for what they believe to be the current exchange rate in USD. The vote is tallied every n blocks by taking the weighted medians as the true rates. Second, a multi-token scarcity management method in connection with TRX is adopted to manage the long-term supply and demand of USDD. In the USDD protocol, TRON’s Super Representatives absorb the volatility of the USDD price. When the USDD price falls below the target in the short term, users will burn their USDD to mint TRX, which brings the USDD price back to the target level. Third, the USDD protocol runs on the TRON network, of which TRX is the native token and the most natural defense against USDD price fluctuations, and it also absorbs the short-term volatility of the USDD price.

From this perspective, through blockchain technologies and DAO, USDD offers a solution to Paul Krugman’s statement of Telimma (the free flow of capital, independence of monetary policy, fixed exchange rate). The underlying blockchain-based architecture ensures the safety and decentralization of USDD, and the algorithm-based price feed system stabilizes its dollar peg, enabling USDD’s high scalability in more future use cases and making USDD a real currency in the digital world.

We can tell from the status quo of global finance that the decentralized stablecoin, represented by USDD, is the path to delivering finance to all. As the digital economy, Internet finance, and cryptocurrencies grow rapidly, it is clear that the world is facing an irreversible trend of finance digitalization. Digital stablecoins, represented by USDD, echo the trend of the times and open a new chapter in making finance accessible to all.