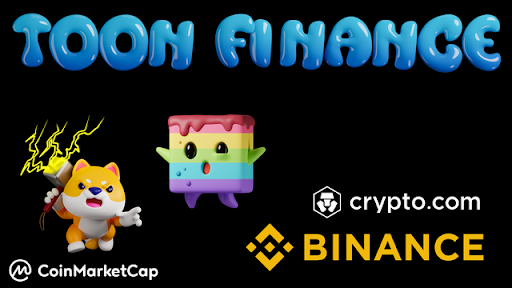 Toon Coin, like other meme coins, is based on a popular internet meme and has gained traction due to its unique and playful design. Toon Coin stands out by focusing on community engagement and real-world applications. To bring the coin to a wider audience, the Toon Coin team has been actively working on partnerships and collaborations with various online platforms and businesses.

Toon Coin’s market performance is impressive, especially when compared to other meme coins. It has quickly established itself as one of the top meme coins in terms of market capitalization. Investors’ interest has been piqued by its Binance listing, laying the groundwork for future growth.

A number of factors contributed to Toon Coin’s dominance over other meme coins in 2023. To begin, the Toon Coin team has worked tirelessly to build a strong community as well as partnerships with a variety of online platforms and businesses. This has increased the coin’s visibility in the cryptocurrency market.

Toon Coin is distinct from other meme coins in that it places an emphasis on real-world applications and utility. The team has been hard at work on a variety of collaborations and partnerships that will allow Toon Coin to be used in a variety of contexts, including online gaming and in-app purchases. This has helped Toon Coin establish itself as a coin with real value and practical application, rather than just a speculative investment.

Toon Coin’s will be listed on Binance by January 26, 2023, one of the largest and most trusted cryptocurrency exchanges in the world. Toon Coin’s Binance listing will increase its visibility and accessibility to a larger investor base, contributing to its rapid value growth.

The Toon Coin team has been open and communicative with the community, providing regular updates and engaging with them on social media and other platforms. This has increased the coin’s popularity and value by instilling trust and confidence in it.

Why Crypto Investors See Toon Finance as an Asset

Security is another important factor to consider when investing in cryptocurrencies. Toon Coin employs a variety of security measures, including anti-hacking methods and multiple levels of security, to prevent hacking and misuse. A cryptocurrency’s scalability is also important to consider, because a coin that can handle a high volume of transactions can allow for faster and more efficient transactions.

Decentralization makes the currency more secure and resilient to attacks because it is not controlled by a single institution or government. Furthermore, the supply of the coin is limited, ensuring that the value of the coin is not diluted by the creation of new coins.

Another factor to consider is the use of cryptocurrency. Toon Coin can be purchased and sold in the same way that traditional money can, and it also allows users to purchase NFTs, expanding their options.

In essence, Toon Coin is an excellent investment due to its high demand, high security measures, scalability, decentralization, and application possibilities. When evaluating a cryptocurrency as an investment opportunity, all of these factors must be considered.

The meme coin industry has grown significantly in popularity and value, with early investors profiting thousands of dollars. Because of the increased interest in meme coins, as well as some of the coins’ innovative approaches and emphasis on community engagement and real-world applications, this is the case.

Toon Finance Coin is one of the market’s most valuable meme coins, and its value is expected to skyrocket once it is listed on Binance, one of the world’s largest and most trusted cryptocurrency exchanges. The coin’s listing on Binance, according to cryptocurrency experts, will increase its visibility and accessibility to a larger investor base, thereby increasing its value.

This is because the coin will be available at a lower price, participants in the Toon Finance Coin presale will have a better chance of profiting.

The meme coin industry has grown in popularity and value significantly, with Toon Finance Coin emerging one of the market leaders. The upcoming Binance listing will raise the coin’s visibility and accessibility to a broader investor base, thereby increasing its value. Pre-sale investors can expect returns of up to 100 times their initial investment.

How to Participate in the Toon Coin ICO Pre-Sale

A presale is a time period during which a company offers tokens to early investors (ICO). This is an excellent opportunity for investors to become involved in a new project at an early stage and potentially earn a high return on investment.

It is important to note, however, that investing in an ICO presale entails some risk. Before making any investments, it is critical to conduct extensive research on the project and the company behind it. It’s also important to keep in mind that you should only invest money that you can afford to lose.

Toon Finance Coin presale is a once-in-a-lifetime opportunity for early investors to participate in a potentially profitable project.

Purchasing Toon Finance presale tokens is a simple process. You’ll need a multi-coin wallet, such as TrustWallet or MetaMask, to do so. Toon Finance tokens can be purchased from the official website once Ethereum has been added to your wallet. This is the last chance for early investors to purchase the coin before it goes public, so you would need to act quickly if you’re interested.