According to three separate letters posted on Scribd earlier today, it now appears as though the U.S. Securities and Exchange Commision (SEC) will be reviewing the rejections it earlier handed out in relation to nine bitcoin ETF proposals. 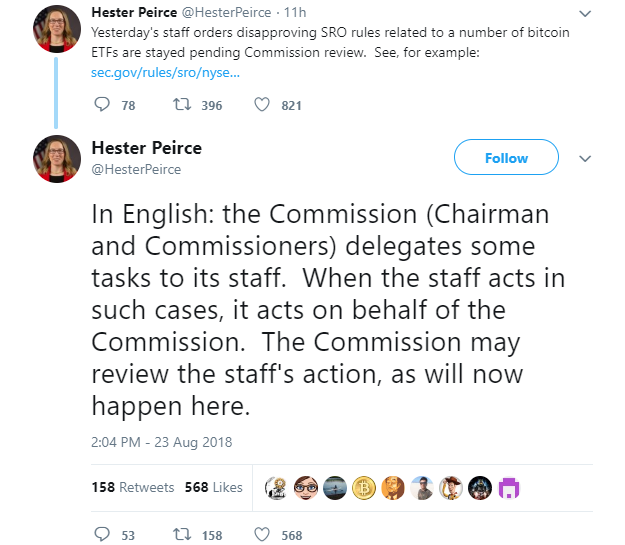 A couple of days back, the SEC had made it clear that it did not see the ETF proposals submitted by Proshares, GraniteShares, and Direxion to be fully in line with existing US financial standards, thereby rejecting the applications of all three companies.

However, since then, a lot of behind-the-scenes action seems to have transpired and now senior SEC officials are looking to reconsider their judgements.

While the exact timeline of when these reviews will be completed remains to be seen, the Secretary of the SEC, Brent Fields, wrote to NYSE senior counsel David De Gregorio stating:

“THIS LETTER IS TO NOTIFY YOU THAT, PURSUANT TO RULE 43 I OF THE COMMISSION’S RULES OF PRACTICE, 17 CFR 20 I .43 1, THE COMMISSION WILL REVIEW THE DELEGATED ACTION. IN ACCORDANCE WITH RULE 431 (E), THE AUGUST 22 ORDER IS STAYED UNTIL THE COMMISSION ORDERS OTHERWISE.”

He then went on to say that the results of any further pertinent action will be notified to the relevant parties as and when applicable.

As can be expected, similar letters were also doled out to the other companies whose Bitcoin ETF applications were also rejected.

With its decision to review its initial judgment, one can only hope that the SEC is able to see the light and thus usher in a new era of digital finance that promises to change the way in which people are able to invest and facilitate trades all across the globe.