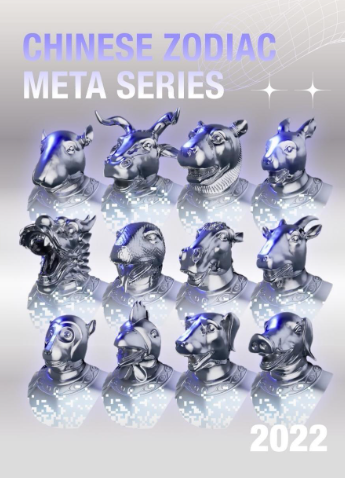 Justin Sun, the founder of TRON, has successfully won the bid on Twelve Chinese Zodiac Heads last week. This unique collection was put on the Twelve Digital Zodiac Heads Special Auction hosted by Metapoly XM, a brand under Poly Auction (Xiamen) last week and was purchased at a hammer price of around ¥9,832,500 (around 1,545,000 USD), an eye-opening price that can match major masterpieces deals of art works in recent years.

The works that Justin Sun clinched in Poly Auction are not pretty much the case as his previous art consumption. Every and each Chinese people comprehends the profound meaning of Sun’s purchase of Twelve Chinese Zodiac Heads, which is also the good deed for a renaissance of traditional Chinese culture.

Justin Sun is appointed the ambassador to the WTO of Grenada last December, committed to promoting the integration of cryptocurrencies with sovereign states and boasts fans and followers globally. The purchase of this collection is also an attempt to promote traditional culture as a genuine Chinese.

Nothing else can attract more eyeballs in today’s crypto world than the METAVERSE and NFT. The tsunami of new technology has profoundly stunned companies large and small including Meta, Microsoft, Disney, Nvidia, and BATJ. These industrial giants are actively placing their bets. But the lack of application scenarios has become a dilemma for future investors.

For instance, how to benchmark the values of NFT works properly? I mean if you participate a traditional auction, the benchmark range of each piece of work is relatively clear. When it comes to the NFT auction, you might get lost totally given few clues of pricing policy could be captured per your rule of thumb.

Despite the aforementioned flaws, the NFT industry for blockchain-based art is going viral. Justin’s personal NFT collections are regarded as part of incredible momentum amid the industrial tsunami. By the way, the total market cap of NFT values have hit a new high of $17 billion per the latest calculation by the market observers.

Absolutely, Justin Sun can now be classified as top-class art collectors as he had won many other well-known NFT works last year, such as The Nose (Le Nez), an iconic work by the venerated Swiss surrealist artist Alberto Giacometti, for upwards of $78 million at Sotheby’s New York Fall Auction 2021, as well as Femme nue couchée au collier (Marie-Thérèse) by Pablo Picasso at $20 million and Three Self-Portraits by Andy Warhol at $2 million at Christie’s 20th Century Art Evening Sale. He also won the bidding for OCEAN FRONT by crypto artist Beeple at $6 million.

But, the thing is, is he even sane or some kind of Great Gatsby simply squandering money around the world?

Apparently, this young crypto tycoon may be aiming higher objectives that are ignored by observers, he might be considering of setting up a digital stage for future art performing. His on-going collection of the NFT masterpieces may become another great feat of his career dedicated to blockchain-based industries. Justin Sun has amassed many top-notch artworks and donated some of them to APENFT Foundation for digital innovation in arts.

APENFT is backed by the underlying technology of top-notch blockchains TRON with support from the world’s largest distributed storage system Bittorrent File System (BTFS), dedicated to promoting the creator economy and fostering the integration of finance, culture and art in Metaverse. It is also believed that one of the animal heads in this collection will soon be listed on APENFT Marketplace for auction and introduced as rare, special-breed horses into WIN NFT HORSE, a horse racing game co-launched by TRON, the APENFT Foundation, and WINKLink.

Likewise, as an insightful industry leader, Justin Sun has publicly announced his prediction that 50% of the world’s top 100 artists and artworks will be recorded as NFTs in the coming decade. A blockchain-based ecosystem has been building a bridge between traditional art and cutting-edge technology, presenting a most fruitful future to both the blockchain and the art industry.

Will he succeed again? Take a look at his track record first. You never know.