According to Coinmetrics, the annual monetary transactions associated with the world’s leading cryptocurrency, Bitcoin, have far surpassed those seen by market giants such as PayPal and Discover.

As things stand, BTC payments lag only behind Visa, primarily due to some of the scaling problems that are being faced by the cryptocurrency. Additionally, while many have previously argued that BTC is not a long-term viable payment solution due to its poor transaction speeds, that debate has effectively been quashed after the new financial figures have come to light.

BTC is Now In a Class of Its Own

While previously Paypal and credit card provider Discover were considered to be the top-dogs of the payments market, various established crypto-analysts have found that BTC’s transaction dollar value has severely “outperformed that of conventional payment providers by a wide margin”.

According to Yassine Elmandjra, a financial analyst for ARK:

“Bitcoin’s $1.3 trillion transacted value seen in 2018 is only an order of magnitude away from that of leading processor Visa. However, we cannot compare Bitcoin and say Visa or MasterCard in terms of their Base layer transaction volumes.” 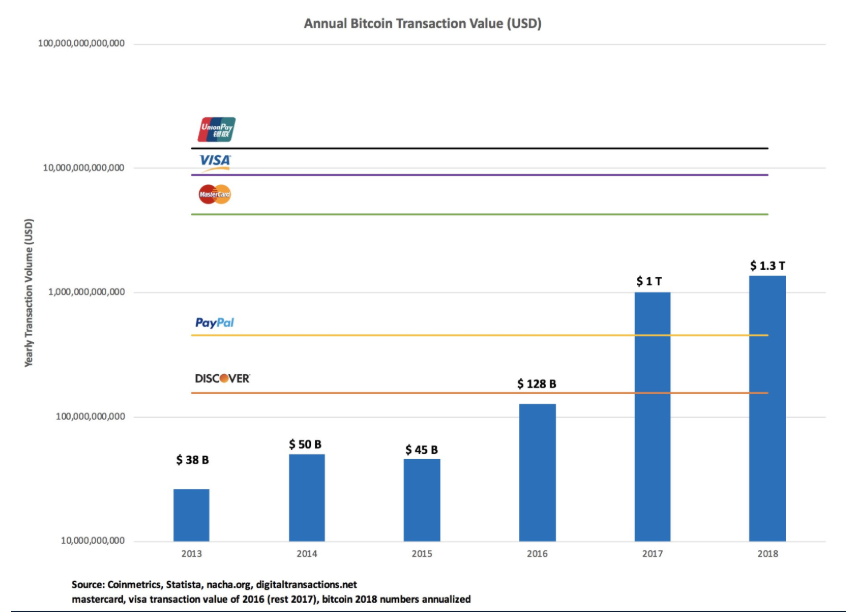 As per the graph, the daily transacted volume of BTC for 2017 stood at a staggering $3-4 billion.

He then concluded by saying:

While Bitcoin is all set to see an impressive transaction throughput of around $1.3 trillion this year, these figures are still far from what Visa has been achieving consistently over the past decade or so. To put things into perspective, Visa handled over $8.9 trillion worth of transactions in 2016, effectively cementing its position on top of the financial food chain.

With that being said, this latest victory for BTC is impressive, to say the least.