Paypal, the world’s most popular money transfer service, is currently embroiled in a highly talked about case wherein the company sent out a letter to the husband of a deceased woman which effectively said that by dying, “his wife had breached their terms of service” and that her contract with the company had effectively been terminated.

The issue was first made public by a UK based media outlet but has since gone viral. The core of the matter involves Lindsey Durdle, a Paypal user who died of cancer last year. Since she owed Paypal more than 3,000 euros, the company sent a letter asking her to clear her due balance. However, her husband then let it be known to the relevant authorities that his wife had passed on— even providing them with a copy of Lindsey’s ID and death certificate. 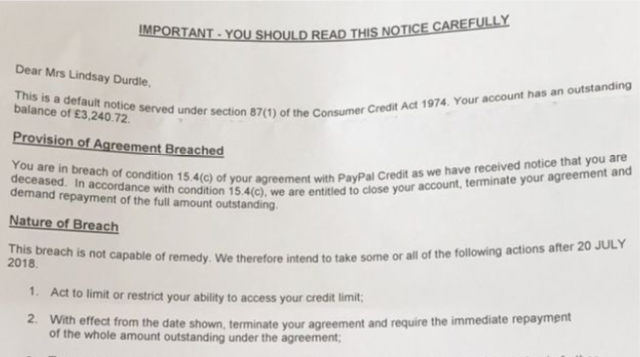 However, what followed was shocking, to say the least. Paypal sent another letter to Mr. Durdle which stated that by dying, his wife had breached their terms of service and that the family was still liable to pay the due amount.

While Paypal has taken a conservative stance and said that the issue was a result of an ‘internal mistake’, it seems as though the payment provider might have taken a similar route in the past as well.

Since the emergence of cryptocurrencies and blockchain based payment options, Paypal has been seeing a reduction in its number of overall users. However, company spokespersons have time and again denounced alt-currencies, often calling them “experimental” and possessing “no real value”.