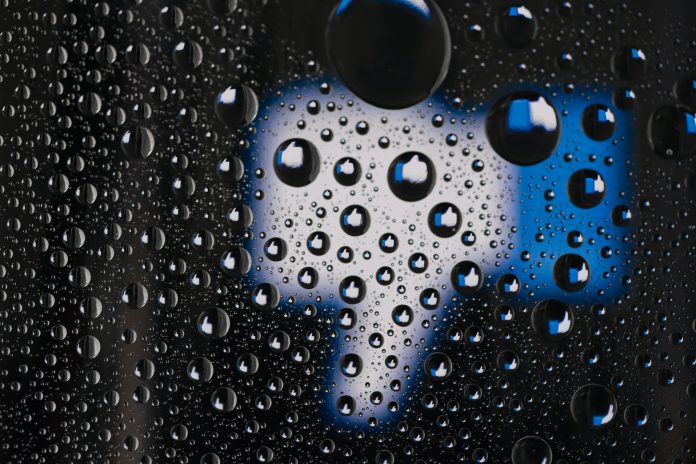 Crypto Twitter has a much different sense of humor in a bear market than in a bull.

Perhaps that explains the community’s unusual response to popular CT persona WhaleChart’s recent tweet asking, “Who is the worst influencer in Bitcoin and crypto?” 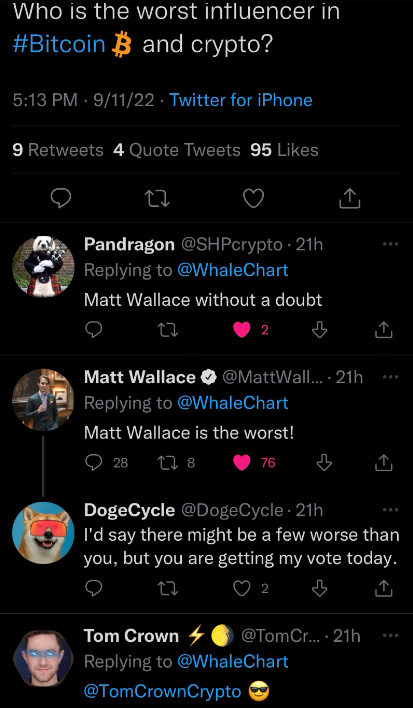 Numerous crypto influencers and aspiring influencers flocked to tag themselves and those they admire rather than dislike.

One day after the original post, the community has spoken. The worst influencer award goes to Matt Wallace. Of 119 responses, 27 (~23%) tagged or mentioned the bad boy of Doge. Wallace himself also responded and even went as far as to share it on his account and encourage his followers to vote for him.

WTF is going on?

Bull markets may be about establishing credibility and reliability, but bear markets are about harnessing attention. When no one is searching for crypto and Twitter engagement for crypto-related posts is at an all-time low, staying relevant is of the utmost importance. Being mentioned in posts that generate positive or negative attention is one way of doing that.

Is Wallace Really “the Worst”?

That all depends on who you ask.

Matt Wallace rose to fame in 2020 when he latched on to the DOGE bandwagon that Elon Musk spearheaded. While older shibes cast him aside outright because of his sole focus on price action instead of the adoption narrative, the TikTok DOGE generation embraced him and his content.

He has since promoted numerous unsuccessful dog-themed tokens, some of which have been rug pulls. When Wallace started promoting his token Accept DOGE (which was later renamed to Accept Crypto) in 2022, the community denounced him for attempting to defraud investors.

Dogecoin’s founder, Billy Markus, called Wallace out on Twitter for attempting to use the Doge name for personal profit. Then, the Doge Foundation threatened to sue Wallace for copyright infringement. Wallace and the Accept Doge team changed their project’s name to Accept Crypto. The project was instantly rugged, but whether or not that was the direct result of Wallace’s involvement is unknown.

For his part, Wallace claims that the Solidity Finance team  – not he – is responsible for the Accept Crypto failure.

A history of promoting scams doesn’t necessarily mean that everything someone supports is a scam, though. Despite numerous failures, Wallace backed the controversial but wildly successful Dogechain and its native DC token.

Like other projects that have used the doge name, the Doge Foundation (and community) rallied against Dogechain’s affinity marketing. However, despite their objections, Dogechain has performed exceptionally well in this bear market.

On Sunday, the chain, which launched in August 2022, hit 25 million transactions. Further, according to data from CoinMarketCap, the DC token, which debuted on August 25th, is up over 120% in spite of dismal overall market conditions.

Depending on your vantage point, you might consider Wallace the worst or the best influencer in crypto. Those among the latter can subscribe to his website here. Regardless, you must admit that he knows how to harness an audience.