One of the world’s most popular online trading portals, HitBTC, has recently been on the receiving end of a lot of flack regarding its “weird operational policies”.

What’s causing all of this hoopla?

According to Sicarious, a popular cryptocurrency analyst and trader, HitBTC “kept his mother from accessing her digital holdings” for more than 3 months even though she had completed all of the necessary KYC checks that had been sent her way. 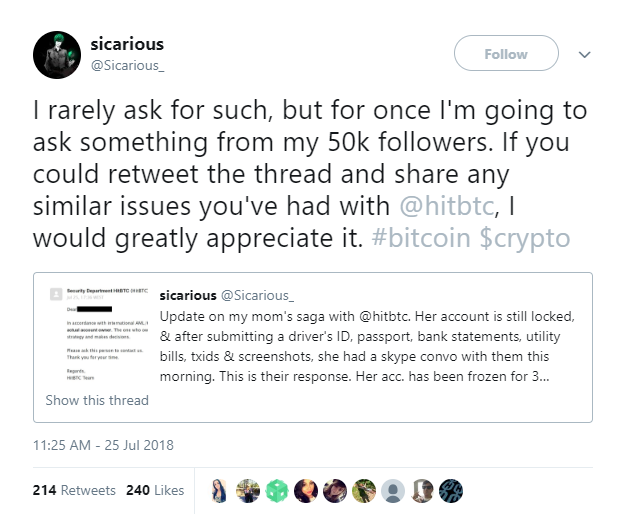 During his appearance on a popular crypto podcast, Sicarious was noted as saying that “even though my mother has submitted all the required documents for EVERY KYC hoop they’ve thrown at her, her account remains locked by the HitBTC staff.”

“Her account is still locked, & after submitting a driver’s ID, passport, bank statements, utility bills, txids & screenshots, she had a skype convo with them this morning. This is their response. Her acc. has been frozen for 3 months… Apparently, HitBTC thinks that a 65-year-old woman asking her son for help when a sketchy-ass exchange steals her money means she’s a front for money launders.”

McAfee is also sick of HitBTC

Sicarious and his mother are not alone in their struggle against HitBTC. Even eccentric millionaire John McAfee has been calling out the exchange for the past couple of months regarding many of its “unfair practices”.

For example, last month, McAfee was noted as saying:

“The crypto exchanges have become the thing that we have originally fought against. Their power is immense. Hitbtc, for example, has increased suffering for millions of poor people who cannot afford the minimum buy-in since it is greater than their monthly income. Boycott them.”

From all of the aforementioned details, it appears as though HitBTC has been losing some of the appeal that initially drew so many customers to itself. However, if things continue to remain the same, the company could lose a lot more clients moving forward.