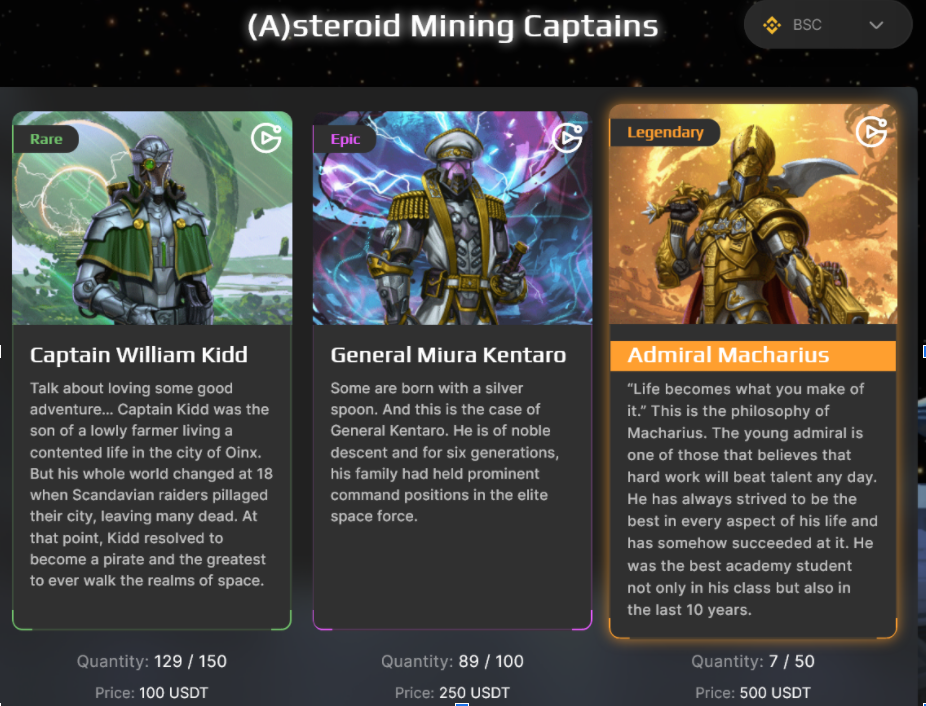 Following a successful Big Bang NFT Distribution Round, Gravis Finance has sunk itself deeper into the non-fungible token (NFT) space with the launch of a revolutionary gamified high-yield NFT farming product.

The community-driven project known as (A)steroid Mining is the latest addition to the Gravis Finance Universe. It gamifies the GRVX token farming process, allowing users to create entire worlds on the ecosystem, generate asteroids, and add game mechanics.

Players are allowed to choose one of three captain characters, assemble ships, and farm for tokens on asteroids.

Usually, only GRVX tokens can be farmed. GRVX is a token with unlimited supply that was created as a reward token for various activities, both in-game and in other Gravis products.

But to celebrate the launch of our GamiFi (A)steroid Mining product we created the Captains NFT collection and allowed them to farm our precious governance token called GRVS with strictly limited supply. For now, the Captains are the one of only two ways to obtain GRVS tokens, the other being Big Bang Round NFTs which are sold out.

Captains are first-generation NFT cards that go into space in search of asteroids. There are a total of 950 captain NFTs in three categories, each possessing unique features that allow them to mine GRVS tokens. The “rare” captain NFT of William Kidd is priced at 100 USDT and allows owners to mine 250 precious GRVS in addition to the ship’s GRVX mining power. The “epic” NFT card of General Miura Kentaro goes for 250 USDT, with token holders being able to mine an additional 625 GRVS tokens. Meanwhile, the “legendary” NFT of Admiral Macharius costs 500 USDT and allows users to mine an extra 1250 GRVS tokens.

It is worth mentioning that the captain collection is limited and will not be reissued. Once the first collection is released, subsequent cards on the crew list, such as the First Mate, will not be able to mine GRVS tokens.

Who are captains without vessels to commandeer? In addition to special characters, (A)steroid Mining features starships that can be equipped with additional items to increase the rate of mining. From Keelback to Harvester, Mining Barge, Star Fort, and Leviathan, these vessels are differentiated not just by mining capability, but also by their skins and appearance.

All features relating to ships, including the ships themselves, skins, spare parts, and additional equipment can be sold on the network’s internal marketplace or other NFT marketplaces like OpenSea. However, ships cannot be purchased directly within the game. Instead, they can be obtained from a loot box with a predetermined chance. The randomizing algorithm is provided by the Chainlink’s VRF, provably-fair and verifiable source of randomness.

As with the captain cards, the total number of loot boxes is limited in supply. According to the project’s team, a new series of loot boxes will be released as the game progresses.

Furthermore, players are allowed to form clans to battle against themselves in order to rank high on the leaderboard. Top clans are entitled to rewards and special unique equipment that can be used in subsequent battles.

Speaking of the utility and value of GRVX, the token has an unlimited supply with a starting price of $0.001. Within the Gravis ecosystem, it will be used to reward gamers and farmers. At a later stage of the project, GRVX will be used to purchase loot boxes. In general, the token will have use cases in (A)steroid Mining, Gravis Farming, Planck Hub cross-chain Bridge, Gravis Autofarming, and several other products within the ecosystem.

In conclusion, the development of (A)steroid mining has been broken down into stages. Between August and early September, the dev team will be working on its captains and loot boxes interfaces, and their corresponding smart contracts. Space mining will be launched in late September, with gears, skins, and equipment being made available in Q4 2021. The clam system and raids have been scheduled for Q1 2022.