At press time, Ethereum is trading for $602. This is about $1 higher than where it stood during yesterday’s afternoon hours. A rise is a rise, but it’s frustrating to see Ethereum hovering so closely to the $600 mark considering we were witnessing prices that exceeded $700 just weeks before.

One source explains that Ethereum has found both support and resistance in “quick time.” Clearly, Ethereum’s present resistance levels are proving difficult to overpower, as trading has been limited to such a short range over the last 48 hours (between $601 and $603).

In addition, it appears Ethereum bounced off strong support in the short-term, but that the bulls are being forced to retreat earlier than expected. While they won’t be gone for long, the group requires time to gather strength and plan its next move regarding how to overpower present resistance and move further towards the green.

The source also suggests that ether’s trading range lies between $599 and $610, of which the latter number is expected to bring greater resistance should Ethereum reach it in the coming days. If Ethereum crosses that boundary, resistance would be experienced at $615 and $622 respectively. At the time of writing, support seems to lie at the $590 mark. 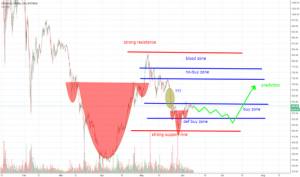 In the meantime, Ethereum – along with several other virtual currencies – are garnering positive recognition from an unlikely source. In a time when cryptocurrencies are the objects of mistrust amongst most financial regulators, Rostin Benham – commissioner of the Commodity Futures Trading Commission (CFTC) – is hailing the technology behind cryptocurrency as a “modern miracle,” and says it has what it takes to shift humanity into a new era of change and growth.

Speaking at the Blockchain For Impact summit, Benham believes a period of “global transformation” is right around the corner, and that cryptocurrencies will play a huge role.

“We have learned that virtual assets respect no borders,” he explains. “That regulation is often behind the curve and unable to keep up with daily developments. At least the developments we know about… As a result, some countries have outlawed virtual currencies. Others have new, strict laws to control them. Many countries simply don’t know what to do; their policy is bewilderment or avoidance.”

Benham is particularly interested in the way cryptocurrencies have managed to force their way into mainstream acceptance. He says they came to light relatively quickly, and that most countries were given no choice regarding whether they would be used or considered by members of the public. He believes it’s only a matter of time before cryptocurrencies become the “new mass market standard.”

“Virtual currencies will become part of the economic practices of any country, anywhere,” he boldly states. “Let me repeat that – these currencies are not going away, and they will proliferate to every economy and every part of the planet.”

In other words, cryptocurrencies will seemingly replace all forms of fiat and dominate the financial infrastructure. Benham likely understands the power and scope that cryptocurrencies possess, and with figures like Benham leading the way, regulators can carve out a future in which digital currencies are safe and usable for everyone.