At press time, ether coin has fallen by roughly $70 and is trading for $533. Over the past several days, many investors and traders alike were excited by the notion that Ethereum had once again surpassed $600, and was potentially on its way to stronger support and price stability. With $660 being the next grand goal, many were confident in the coin’s ability to move beyond set expectations, but now those expectations are dropping fast. 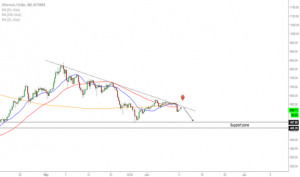 Ethereum’s relative price slump can be blamed on a few differentiating factors. For one thing, Coinrail – one of the largest and most popular digital exchanges in South Korea – reported a hack on its website during the early morning hours of June 10. While most of the targeted coins have been frozen and precautions have been taken to prevent the hack from leading to any lasting damage, many major forms of cryptocurrency – including Ethereum, bitcoin, bitcoin cash, Ripple and Litecoin – have incurred serious price drops of five percent or more.

Under normal circumstances, the drops would have likely ended there, and the coins would have later undergone a slow, yet steady period of recovery, but at press time, the Commodities Futures Trading Commission (CFTC) is looking to subpoena four initial digital currency exchanges: Coinbase, Kraken, Bitstamp and itBit. The organization is seeking trading data as part of a bitcoin price manipulation probe to see if futures trading on all four exchanges could have led to massive swings in the bitcoin price.

While bitcoin is a commodity and therefore different from several other digital currencies (ether potentially classifies as a security given its presale beginnings), the maneuver appears to be affecting the prices of every top global cryptocurrency, including Ethereum and EOS.

In addition, the mentioned exchanges are refusing to cooperate, and are likely delaying the inevitable, as bitcoin – which falls under the commodities category – is subject to CFTC regulations. This offers further proof of what most cryptocurrency investors and traders always believed: that bitcoin affects all other major forms of crypto, and that digital assets’ behaviors seem to intertwine.

It is expected that if bitcoin should fall into the lower region of $6,000, altcoins and tokens – particularly those with smaller volumes and market caps – will incur massive price reductions, as less-qualified or newer tokens tend to experience larger movements on both the down and upsides of the market plane. Thus, if bitcoin drops further, we’ll probably see Ethereum follow suit.

Originally, some analysts were predicting that set resistance levels for Ethereum were going to be very difficult to overpower, and that Ethereum would likely claw its way back into red territory before it pushed forward. It can be argued that Ethereum is potentially doing what it was slated to do either way, and that the Coinrail hack and the CFTC subpoenas are just exacerbating the situation.

Presently, it is unknown if the drop is part of a short-term or long-term maneuver. Originally, Ethereum was slated to strike $622 granted resistance set at $606 was surpassed. Now, investors would likely be happy if Ethereum went up to $550 in the coming days.