At press time, Ethereum is trading for roughly $590, and the currency has experienced some difficulty in staying above $600.

According to one source, the price dump is a result of a recent sell-off that ultimately deterred investor interest and brought the second-largest cryptocurrency down by over two percent. Similarly, the value of Ethereum presently stands a little over $60 billion, while trading is most active on Bitfinex and OKEx, leading to a combined daily trading volume of nearly $1.8 billion.

However, this same source suggests the drop may be a short-term consequence. The currency is once again garnering solid support, which could ultimately lead to renewed interest in buying in the coming weeks. Once this occurs, stronger support will develop that could push the currency beyond the $650 position. 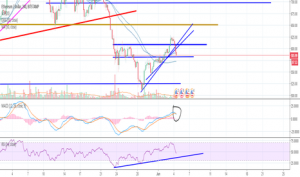 In the meantime, Ethereum co-creator Vitalik Buterin is remaining positive about his “brainchild,” and states that second-layer Ethereum-based solutions like Plasma and Sharding should move the currency’s blockchain power far enough to handle “one million transactions per second.” Speaking at a recent OmiseGo AMA session, Buterin stated:

“The reason I think layer one and layer two [networks] are complementary is because if you look at the math, the scalability gains from the layer one improvements and layer two improvements do ultimately multiply with each other. If you have a Sharding solution, the Sharding solution itself might increase the scalability of Ethereum by a factor of 100, or eventually even more, but then, if you do Plasma on top of the scalability solution, then what that means is you’re not just doing 100 times the amount of activity. You are doing 100 times the amount of entrances and the amounts of exits.”

Granted Buterin’s words come true, Ethereum’s blockchain would likely leave bitcoin’s in the dust. Buterin states that bitcoin can only handle about three to four transactions per second, and suggests its technology is out-of-date and unable to keep up with competing altcoins.

“It is already at peak capacity,” he explained when discussing bitcoin’s transaction capabilities. “Ethereum has been doing five per second, and if it goes above six, then it is also at peak capacity. On the other hand, Uber, on average, does 12 rides per second, PayPal several hundred, Visa several thousand, major stock exchanges tens of thousands, and in IoT, you’re talking hundreds of thousands per second.”

In addition, Ethereum appears to be garnering further popularity with both financial and programming companies alike. Remix – a platform designed for writing, compiling and debugging Solidity code – is now employing the Ethereum blockchain to create smart contracts through the Solidity language, which is comprised of C++, Python and JavaScript. Representatives of the company mentioned that while Ethereum wasn’t their only choice, it was undoubtedly the most powerful and popular, making the decision to use it a no-brainer.

Blockchain venture production studio ConsenSys also announced in a blog post that the word “Ethereum” has been googled more than 110 million times, so it’s not likely the coin has lost – or will lose – its following anytime soon, ensuring it’s still fair game between the bears and the bulls.