At press time, Ethereum is trading for about $17 higher than where it stood during yesterday’s peak hours. The currency is showing it has what it takes to battle bitcoin, and why it has the right to be called the world’s second-largest cryptocurrency. 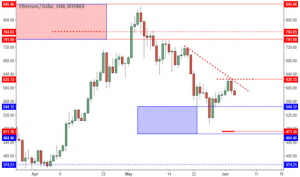 Ethereum is now slated to receive far more exposure and attention as Chinese startup IM Token – which claims to be the world’s largest ether-based wallet – is moving its operations to Singapore to gather additional followers and subject itself to lesser regulatory scrutiny.

China has been relatively up and down when it comes to cryptocurrencies; the country was among the first to ban ICOs, as well as bar foreign accounts on domestic asset exchanges. However, praise towards blockchain technology from current president Xi Jinping appears to be clearing a path for crypto-based businesses to move in and strike accordingly.

IM Token recently completed a venture funding round through IDG Capital, garnering a grand total of $10 million. The company developed one of the first cryptocurrency wallet apps to support the Ethereum blockchain and is seeking to enforce global expansion. Presently, about 70 percent of the wallet’s users are still based in China. In total, the app boasts approximately four million users, but is looking to reach 10 million towards the end of 2018 by advertising to neighboring regions.

Chief executive officer and founder of IM Token Ben He explained that Singapore was the perfect choice to set up operations, as the country is “very friendly to blockchain technology” and has emerged as the “up-and-coming destination” for Chinese companies in the crypto industry. Thus far, Singapore is home to major ventures like Bitmain, which develops cryptocurrency miners for corporate clients, and Huobi, one of the world’s largest and most popular digital currency exchanges. He says they plan to add roughly 20 employees from Singapore to their official roster in the coming months.

“With the new headquarters in Singapore, we hope to reach users in more countries,” he confirmed.

In related news, however, a new report issued by CNBC states that Ethereum is losing momentum amongst cryptocurrency investors, and has lost some of the heightened popularity it once experienced in 2017. Statistics gathered by DataTrek Research suggests that Ethereum searches on Google have dropped by 70 percent, or nearly three-fourths. In addition, bitcoin searches have also dropped by 75 percent, while bitcoin cash and Ripple searches are down by 82 percent and 87 percent respectively.

Co-founder of DataTrek Research Nicholas Colas explained, “We use Google Trends to track queries for ‘bitcoin’ as a proxy for potential new buyers.” He also says that cryptocurrencies need to employ fresher narratives if they’re going to continue to garner global interest.

This information goes against a report we discussed in yesterday’s price piece, which suggests that Ethereum has been googled a total of 110 million times. While a direct time frame is not given for the searches in question, it is hard to imagine that Ethereum has lost as much popularity as the report might suggest, especially now that it has managed to break the $600 mark.