At press time, the second-largest cryptocurrency and number one competitor to bitcoin has fallen by over $40 from yesterday’s $510, and is now trading for a disappointing $467. 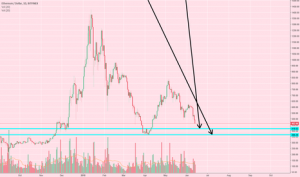 While the price of the currency may be falling into oblivion, the technology behind it seems to be retaining its popularity amongst crypto-based businesses and tech startups. Kevin Rooke – a cryptocurrency researcher and YouTuber – explains that 94 of the top 100 blockchain projects have been launched via the Ethereum blockchain, and that the Ethereum community boasts over 200,000 developers.

“You simply cannot build excellent applications and products without a big developer base behind you, but today, Ethereum has roughly 250,000 developers building on its platform. The industry is still very small, [and thus] 250,000 is a shocking number, but Ethereum’s development framework called Truffle already has more than 500,000 downloads, and even through the price fall of 2018, development interests have continued to rise.”

Some of the major blockchain projects that exist on the Ethereum network include the $2 billion China-based IoT blockchain platform VeChain; the $1 billion high performance blockchain Ontology, and the $900 million South Korea-based ICON. Even Tron – the 10th largest cryptocurrency in the world – is built on the ERC20 token standard of Ethereum.

Rooke explains that in terms of technology and stability, Ethereum has already won the blockchain game by a longshot:

“How do you get developers when you don’t have anyone using your platform? How do you get people using your platform when you don’t have developers who are going to build that underlying infrastructure to make it easy to launch applications? In some ways, money can kickstart the process, but in crypto today, everyone has money, including Ethereum, so that cancels out the competitive advantage.”

Financial analyst and author of the book The Ten Golden Rules of Leadership Panos Mourdoukoutas further explains that Ethereum – along with competing altcoins like Ripple – is about to become much stronger thanks in part to the recent hack of South Korea’s Coinrail exchange.

While he believes that a “great deal of turbulence” is likely to occur in the short-term, cryptocurrencies – particularly in Asia, where they are often looked at as means of avoiding government control – are largely sold off after a hack, which leads to decreases in their respective premiums. This, in turn, allows new investors to step into the ring and purchase currencies at lesser prices, thus giving necessary boosts to the respective markets.

In addition, it also causes regulators to take greater stances regarding security implementation and protecting customer funds. CEO of Blockstar Christian Ferri states, “As in every technology, hacking will be painful for some in the short-term, but it will be a major driver in strengthening the crypto ecosystem, making it more secure, which is key for mass adoption.”

CEO and co-founder of Sagewise Amy Wan agrees, saying, “There will always be a community of crypto enthusiasts, despite all the hacks, but blockchain and crypto will not become more mainstream unless and until the space resolves these fundamental infrastructure issues and provides users with transactional confidence and certainty.”