While many analysts had been predicting a drop in Ether’s value based on its technical forecast, the world’s second largest cryptocurrency by total market capitalization has continued to defy all odds and scaled up to an impressive price point of 221.93 since yesterday afternoon— when the currency was trading around the $210 mark. 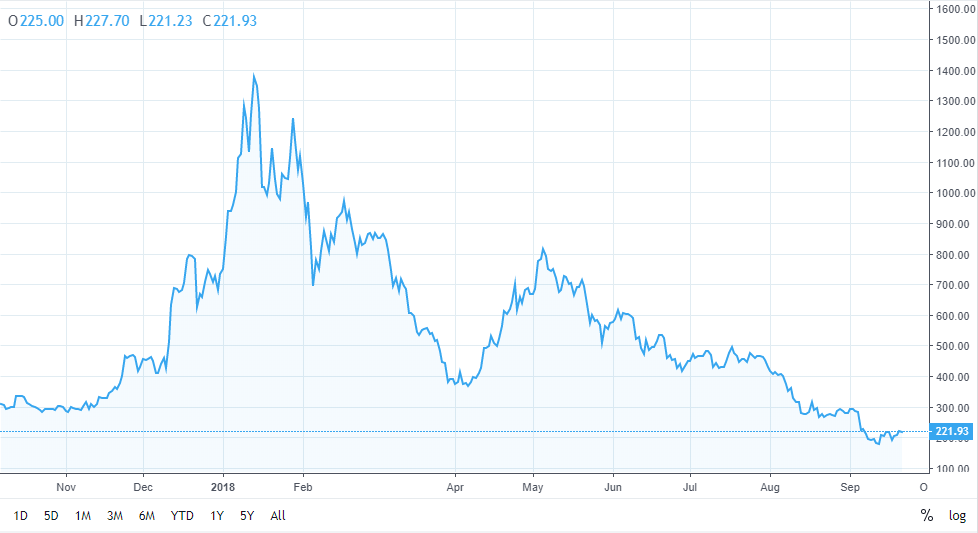 What’s even more impressive is that within the span of the last 24 hours, ETH has gained over 6% in value, even touching a relative high of $225 just a few hours ago.

After issuing a tweet yesterday which claimed that “Bitcoin would lose 50% of its market share to Ethereum in the coming 5 years”, Weiss came under a lot of fire from crypto enthusiasts and investors from all over the world for releasing such “disingenuous and under-researched information”. 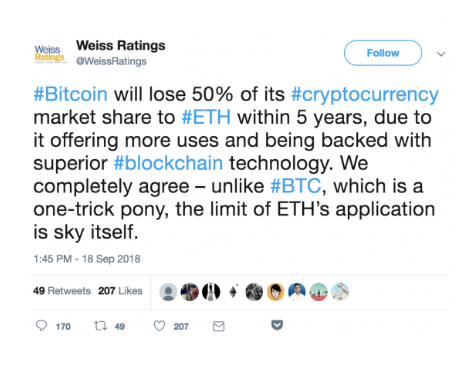 However as soon as the Twitterverse pointed out factual errors in Weiss’s so-called “expert predictions”, the global ratings company retracted its statement by saying:

“In 5 yrs we will see #ETH-LIKE platform dominating the market – not necessarily ETH. Hard to predict which project dominates, but we feel usefulness and flexibility of ETH will be the standard. We apologize for not being clear. Our earlier tweet was a comment on an article (below).”

As per a recently published op-ed piece by Clem Chambers on Forbes, the market analyst believes that last year’s crypto boom was similar to the dotcom bubble of the 90’s. Chambers then added, “we are now in the pit of the crypto crash and as far as altcoins go, we’re getting to the bottom of that pit real fast.”

He also carefully elaborated upon the issues existant within the Ether network and why the currency would fall to below the $100 mark in the coming few years by saying:

“The problem for ethereum is that a huge number of owners got ethereum by selling their pipe dreams in ICOs. Startups are generally pipe dreams and some payout hugely.”

“There is a huge group of outfits rich in ethereum, spending in fiat. That fiat must be covered in sales of ethereum. Their money flow has to be out of ethereum into fiat. Ethereum was the currency they got paid in and it is fading fast, no sensible startup would hold onto it, when they must pay bills in ‘real’ money. This is what is dragging heavily on ethereum. When it will stop is hard to know.”

The past few days have been quite good for the alt-coin sector, especially for digital currencies like XRP, Stellar, Cardano, all of whom have seen an increase of 40%,14%,15% respectively over the course of the past 24 hours.