There seems to be no end in sight for Ethereum’s ongoing woes, as the currency experienced a fresh low of $193 yesterday afternoon. However, what’s worse is that many market analysts including Bloomberg’s Mike McGlone have predicted that ETH could scale to as low as around the $150 mark by the end of the year. 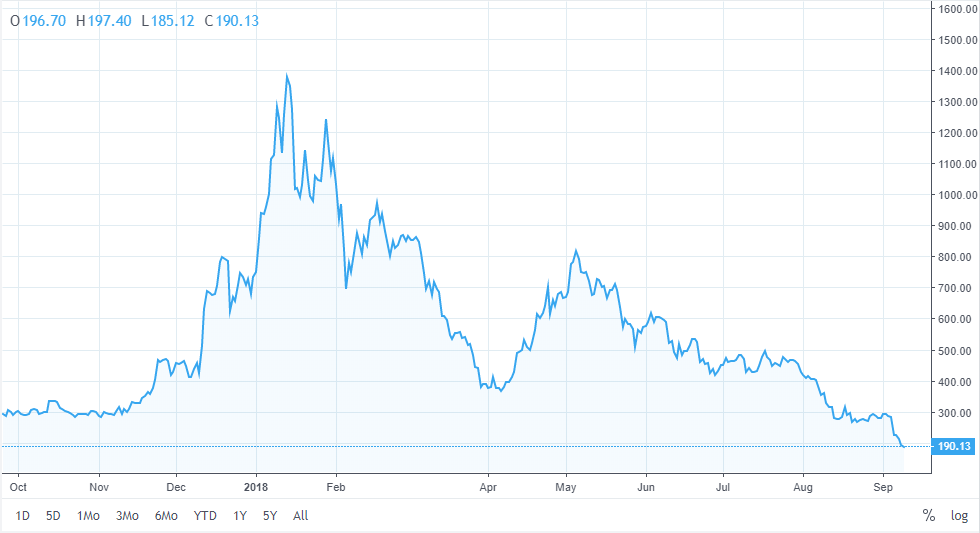 During the 2018 edition of the Ethereum and Blockchain Conference that took place in Hong Kong earlier this week, Ether co-founder, Vitalik Buterin, said that ETH investors should get real and ‘not hope for another crypto bull-run like the one that was witnessed earlier this year’— when the price of a single Ether token scaled up to an impressive $1374.

He then went on to say that while the blockchain community as a whole is witnessing an unprecedented level of growth at the moment, the real adoption is coming from individuals looking to explore new, real-world applications rather than simply investing in digital assets.

In this regard, Buterin added:

“The blockchain space is getting to the point where there’s a ceiling in sight. If you talk to the average educated person at this point, they probably have heard of blockchain at least once. There isn’t an opportunity for yet another 1,000-times growth in anything in the space anymore”, Buterin said as he explained that the blockchain community’s marketing strategy throughout the first six or seven years “is getting close to hitting a dead end.”

Once the second most sought-after cryptocurrency in the market and a direct rival of Bitcoin, many people now believe that Ethereum could slowly be phased out by newer, more innovative digital assets such as Cardano, EOS in the coming few years. To further put things into perspective, the crypto sector now offers investors with more than 1,900 altcoins when compared to around 700 tokens when Ether reigned supreme.

The reason for Ethereum slowly being sidelined is due to the emergence of future-ready blockchain ecosystems such as ICON, Cardano, Aeternity that not only provide a high degree of scalability but also allay many of the transaction throughput worries that currently exist with the ETH ecosystem.

While the problems for Ethereum have become all too visible within the past week, it is also important to note that Bitcoin too has been on the receiving end of a lot of bearish market pressure during the same time period. At press time, the world’s premier alt-asset is trading at $6,221—  thereby showcasing a total value loss of 4.2% since yesterday afternoon.