It’s a great start to a new week for cryptocurrency markets. While there aren’t any big price changes, most markets are in the green today which is a great sign. EOS has finally reached the dreaded $4.0 support level. Let’s take a look at some relevant EOS news and see if anything caused that spike, we will also take a look at the charts and see what they have in store for us.

The biggest news for EOS, and the main reason the price is exhibiting so much bullish momentum is due to the upcoming EOS version upgrade on September 23rd. As discussed in our previous EOS price prediction:

“The biggest deal about the new EOS upgrade is that it will allow dApps to pay users for their CPU power.”

This new feature will give EOS a leg up on Ethereum and allow developers to create some truly revolutionary dApps. Ethereum is also gearing up for its ETH 2.0 upgrade on November so the two smart contract platforms are definitely going head to head.

In other not so positive news, NullTX reported how a hacker stole 30,000 EOS by exploiting a gambling dApp. The app in question is called EOSPlay and the hacker used the REX platform which allowed him to stake CPU power and in exchange “negate” other users’ transactions. An extremely clever technique that was going to be used to exploit an app by someone sooner or later.

1. Rented a huge amount of CPU and NET at #EOSREX resource exchange.

4. Initiated some transactions to the attacked contract. Won a lot of $EOS in gambling DApps. 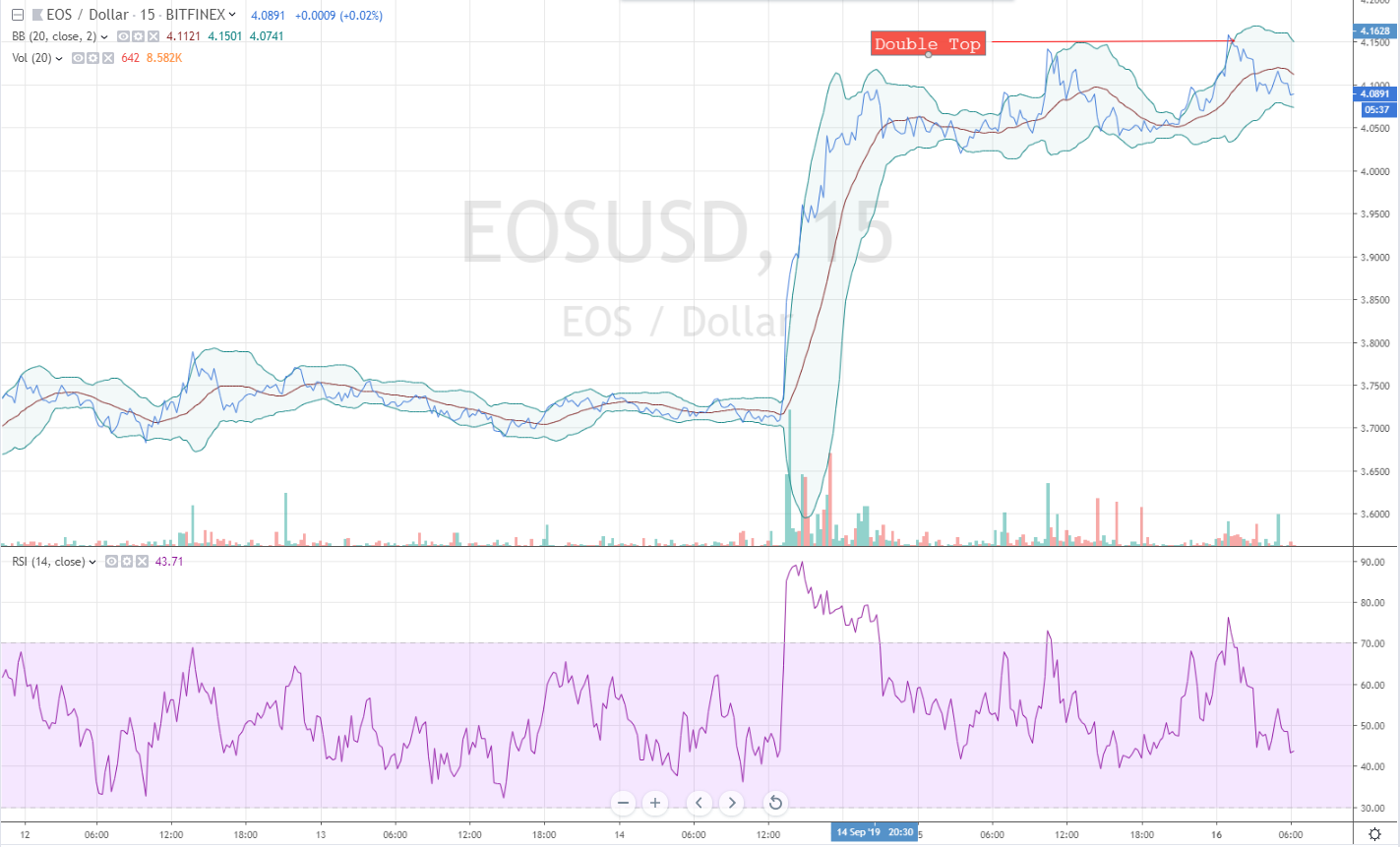 Relative Strength Index: The RSI is currently at a healthy 43 points. It’s a bit low, but that’s expected given the recent slight price decline.

Bollinger Bands: The price is also leaning towards the low end of the band which most likely means it will stay at the current level for a few more hours at least.

Volume: The volume is surprisingly high at the time of writing. That’s most likely because it’s a start of a new week when market action usually picks up.

Double Top: With the EOS price dropping from a high of $4.15 to a current of $4.09, a double top pattern has formed. This pattern is extremely bearish, but the caveat here is that a double top usually signifies medium to long term trend change. Since we are looking at the 15 minute chart, we are dealing with short term trends. As such, there’s no reason to take the double top too seriously.

Because we’re at the start of a new week, and with the EOS and Ethereum upgrades ahead of us, I’m going to predict that EOS will be able to hold the $4.0 support. Even though some news came out about the EOSPlay hack, 30,000 isn’t that significant and won’t have much of an impact on the market. On the other hand, with the new EOS version upgrade coming up in seven days, bullish momentum is in the works for the cryptocurrency.

On another note, it’s important to keep a good eye on Bitcoin’s price movements. As any big swings will have a similar effect on the rest of the crypto markets.