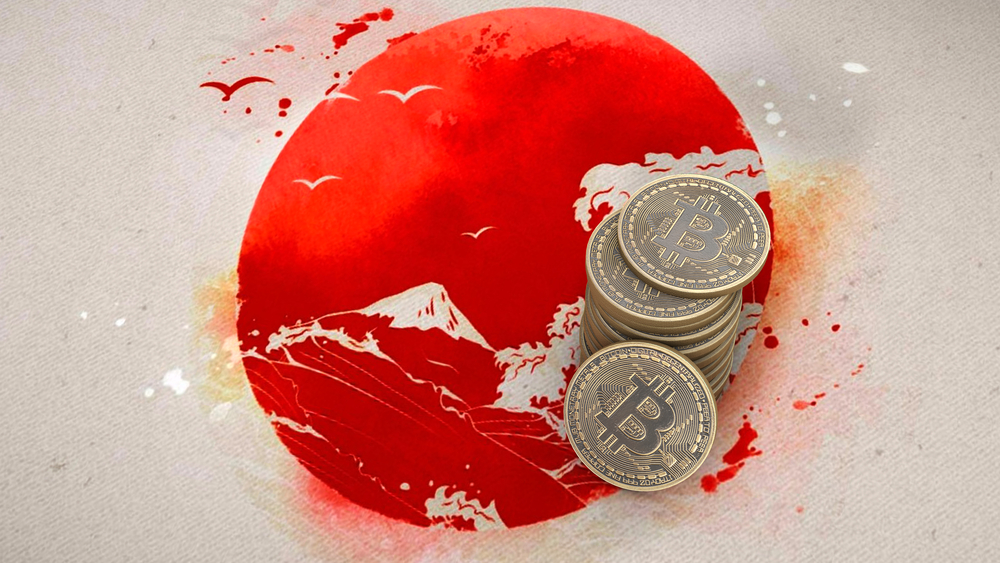 Japan is an exciting region for cryptocurrency and blockchain. It is one of the few countries with open-minded regulations regarding exchanges and other service providers. However, the overall trading volume shifted as bitFlyer continued to build momentum at the expense of other firms.

Most people outside of Japan can’t name three operational exchanges in that country. That is to be expected, as these companies do not generate significant news headlines. Instead, they focus on providing optimal service and growth rather than direct marketing like some Western firms. Even so, companies like Liquid (not to be confused with the Bitcoin sidechain), bitFlyer, Bitbank, Btcbox, and Coincheck all hold respectable market positions.

Or that used to be the case, as Liquid has dried up completely. Not too surprising, as the trading platform was affiliated with FTX. Once FTX went boom, all of its associated firms and entities filed for bankruptcy accordingly. As such, Liquid is no longer a platform for crypto trading today, allowing the other firms to claim more market share. That is how it would work in an ideal scenario, as Liquid once accounted for 42% of all crypto trading in Japan.

Interestingly, it seems most of Liquid’s market share ended up with bitFlyer. The exchange has always been dominant in Japan and has continued to grow throughout most of 2022. That momentum accelerated in Q3 and Q4 2022 as Liquid began losing momentum and liquidity. However, Bitbank, Btcbox, and Coincheck also noted a solid increase in trading activity. The bear market did not deter traders across Japan too much, which is a good sign. 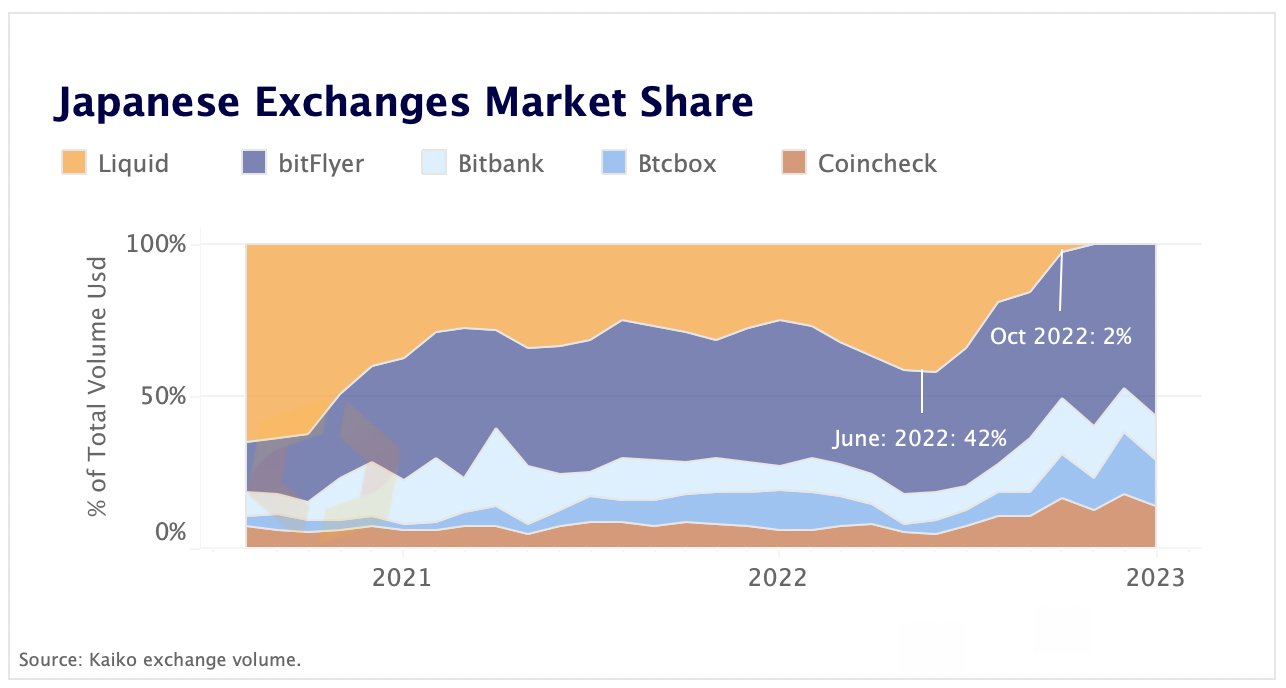 Unfortunately, most companies could not retain the influx of trading volume. As a result, numbers have gone down again across Bitbank, Btcbox, and Coincheck. The latter notes the slightest dip of the three but also gained the lowest volume in late 2022. bitFlyer is the only unaffected trading platform in Japan, which has now become the dominant force again. The company represents over 50% of the market, confirming users enjoy using the platform.

Figuring out the trading volume across Japanese exchanges is simple. CoinGecko, the leading crypto data aggregator, provides normalized trading volumes for all exchanges in Japan. It confirms that bitFlyer has a solid market lead, with a normalized daily volume of over $55 million. That isn’t as high as some might expect, but Japanese traders appear to trade smaller volumes than the rest of the world. Coincheck is, interestingly enough, in second place with almost $39 million in daily volume. 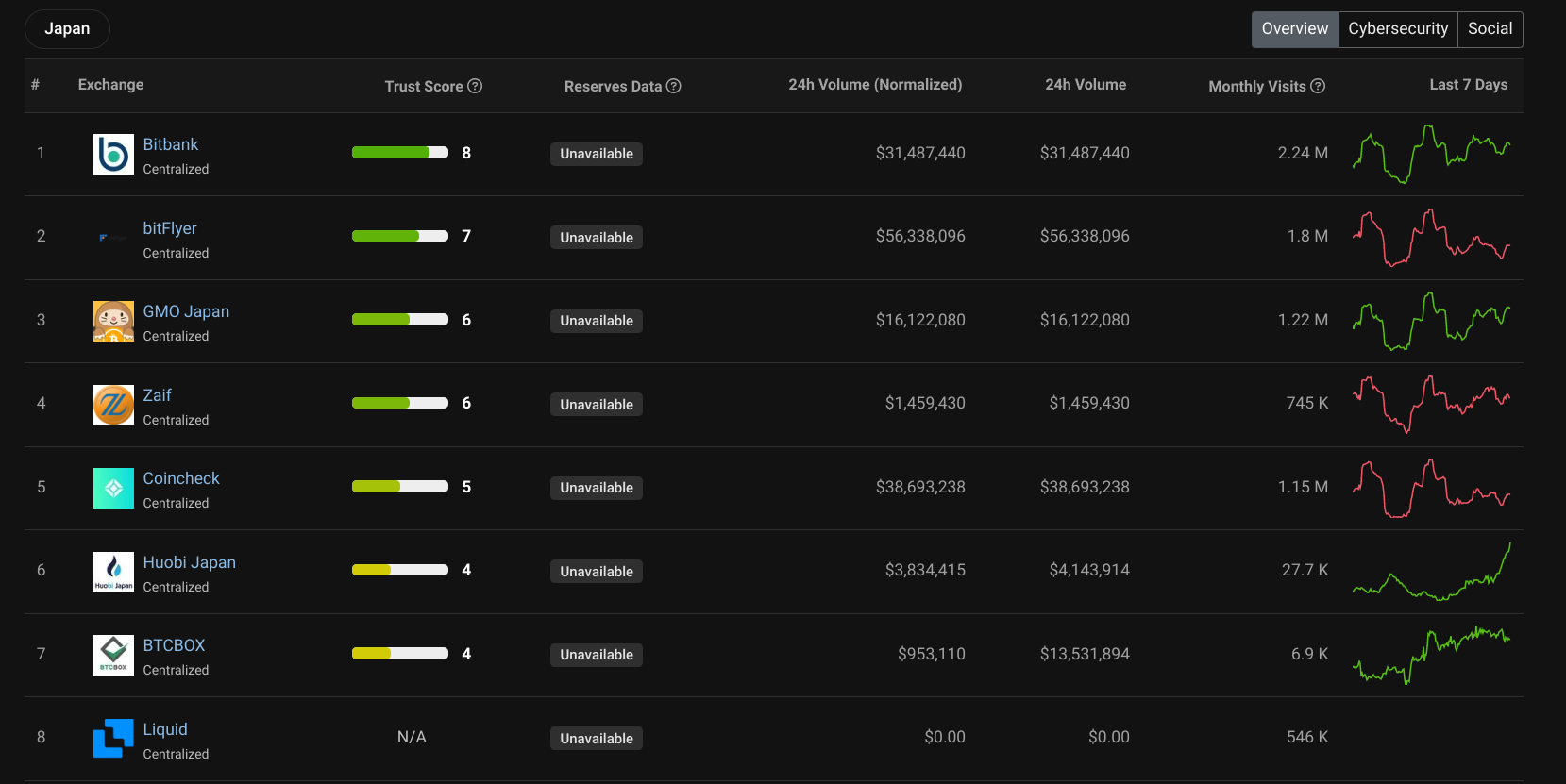 The other exchanges in the top five include Bitbank ($31.4 million), GMO Japan ($16.1 million), and Huobi Japan ($3.8 million). One thing all Japanese platforms have in common is that there is no known proof of reserves yet. Moreover, these exchanges have a trust score of 8/10 or lower, something that will hopefully improve over the coming years.

ABOUT US
Crypto Mode is an independent news source founded in April 2018. We strive to bring you the latest Crypto news. Our goal is to produce interesting and valuable content to our readers and educate you about cryptocurrency.
Contact us: conta[email protected]
FOLLOW US
© CryptoMode 2019