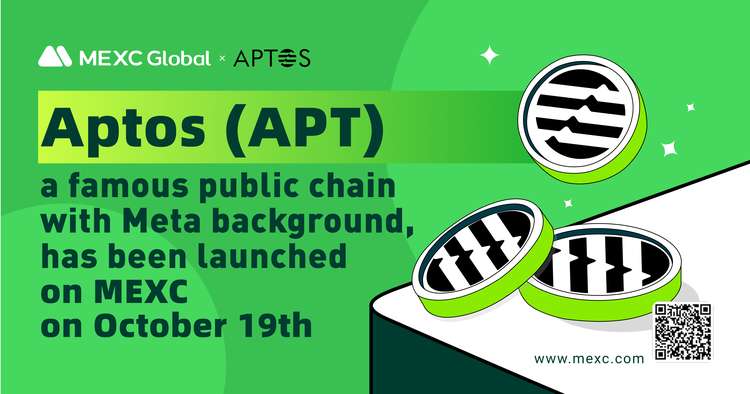 October 19, 2022 – The latest news from Aptos indicates that it will launch the mainnet in the near future. At the same time, its mainnet token APT was announced by major mainstream exchanges before it was in circulation. The cryptocurrency trading platform MEXC listed the Aptos mainnet token APT at 00:45 on October 19 (UTC). It is the world’s first trading platform for Aptos.

The Aptos team will build its new Layer 1 blockchain based on the original Libra whitepaper. However, unlike Libra, the project will focus not on cross-border payments but on smart contracts.

Different from the current public chain such as Ethereum, Aptos inherits the underlying technical specifications of the Diem project, uses Move programming language and BFT consensus protocol, aiming to build a more scalable blockchain to meet the needs of billions of users and large enterprise customers, so as to carry out the storage and transaction of crypto assets in a convenient way.

Aptos’s development builds partly on technology that has been publicly developed at Diem over the past three years. The Move language is a brand-new development language focusing on the blockchain’s security, scalability, and upgradeability.

Earlier, Aptos stated in its medium that the original Diem team would try to restart the project in the form of Aptos, after Meta confirmed the sale of Diem-related assets.

Currently, representatives of new public chains using the Move language include Aptos, Sui, and Linera. The biggest feature of Move is security, which provides all-around security for smart contracts in terms of language, virtual machine, contract invocation, and contract operation. In terms of composability, Move also provides a better solution.

According to public information, the development team of Aptos originated from Diem, the cryptocurrency project of Meta (formerly Facebook). Co-founder Avery Ching worked at Facebook for more than ten years as a chief software engineer and was the technical lead of the Novi team, the former Facebook-owned encryption platform.

MEXC is the world’s leading cryptocurrency trading platform, providing one-stop cryptocurrency trading services for spot, ETF, futures, Staking, NFT Index, etc., and serving more than 10 million users worldwide. The core team has a solid background in traditional finance, and has professional financial product logic and technical security guarantees in terms of cryptocurrency products and services. In October 2021, MEXC Global won the title of “Best Cryptocurrency Exchange in Asia.” Currently, it supports the trading of more than 1,600 cryptocurrency, and is the trading platform with the fastest launch speed for new projects and the most tradable categories. For more information, visit the website and blog, and follow MEXC Global and M-Ventures & Labs.

Tron (TRX) And Stellar (XLM) Price Predictions – Could The Hideaways (HDWY) Overtake Them Both?