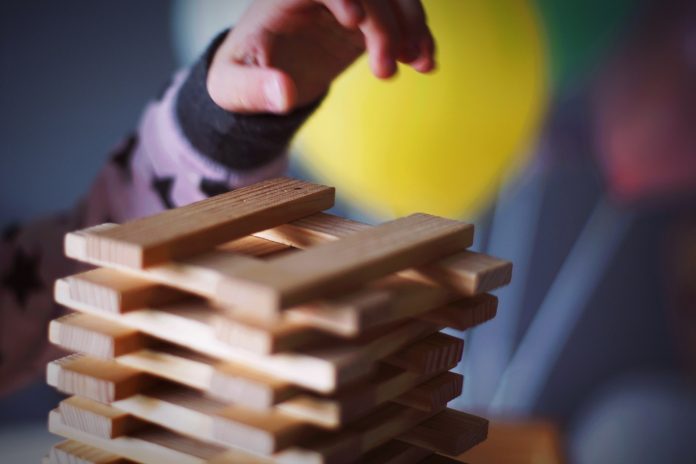 Although the May 19th Black Swan event was a huge setback to the crypto scene, the resulting aftereffects revealed several opportunities within the crypto industry and potential future market trends. The steep value drop of BTC and ETH can be attributed to Elon Musk’s reversal on BTC payments for Tesla and China’s suppressive regulations. The market crash not only impacted centralized exchanges (CEX) but severely affected DeFi platforms as well.

Regardless, the DeFi market is gradually bouncing back alongside the strong rebound of ETH in the last week of May 2021. The total value locked(TVL) in AAVE has broken through 12 billion USD, setting a new high. In addition, the TVL across the DeFi industry is still holding strong above 100 billion USD, flexing DeFi’s tenacious vitality.

With regards to DeFi, let’s look at the data of YouSwap, a decentralised exchange, and the project analysis.

With the advent of decentralised-applications, or dApps, YouSwap has also integrated multiple dApps to provide a variety of services for their users. Housed under YouSwap’s BoomBox, CoinLaunch, a one-click token issuance for those who would like to create their own project or tokens on the HECO or BSC chain. Simultaneously, there’s also CoinStarter, an IDO/ISO (Initial Swap Offering) token sale and initial release model where project parties are able to fundraise from investors, users, and developers.

In terms of trading experience, YouSwap users enjoy high TPS (speed) and low gas fees of HECO and BSC chains. The DEX also has an invitation mining and transaction mining component, rewarding users for using the platform. An interesting point to note is that YouSwap has recently announced the development of cross-chain aggregated transaction services scheduled for July 2021. The implementation of the cross-chain aggregation, aims to ensure that users are able to get the best transaction path on the entire DeFi network with extremely low slippage, creating the ultimate one-click exchange experience.

Last but not least, in terms of ecological improvement, YouSwap will be implementing lending services, machine gun pool investment and financial management and risk-hedging products for derivatives in the future. To lower the entry barriers into the blockchain economy for the mainstream public, YouSwap will also be implementing a decentralized stable currency exchange and transfer function on the Ethereum Layer 2 network.

YouSwap launched its services on the HECO mainnet on April 10th and held an official joint event with HECO, the “Golden Shovel” event on April 30th. The collaboration allowed YouSwap’s TVL to reach a record high of 25 million USD: 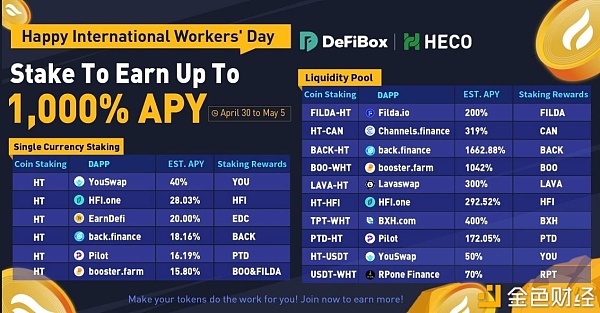 As seen from DeFiBox (a DeFi aggregation site), the overall rating of YouSwap is relatively high, placing YouSwap at 33 place, out of 89 DEXs. Looking at the DEX index by blockchain, YouSwap ranks 11th out of 35 DEXs on the HECO chain.

YOU Token Plan and Release

Decreased production: With each mining cycle, the monthly mining production will be reduced by 1%, from 4% to 3% in the next cycle. 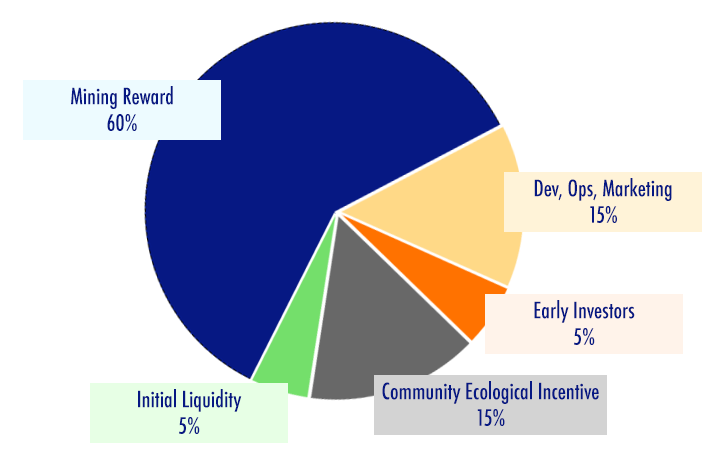 15%: used as the founding team’s operations, technology research and development, etc., the next four phases after the mainnet launch for half a year are the same as the production reduction phase;

5%: Used as an early investor to participate in the early YouSwap ecological construction. After the mainnet is launched half a year later, the next four phases are the same as the production reduction phase;

According to the available data on YouSwap’s official website and chains, the total token distribution on all 3 chains is 9 million and its circulation rate is 4.5% as of now. This shows the potential of YouSwap considering that the current circulation of the YOU tokens is still very little (9 out of 200 million).

Various usage scenarios of YOU tokens are as follows:

Platform DAO governance: Users who hold a certain number of YOU can initiate upgrade proposals, such as modifying handling fees, the distribution of liquid mining capital pools, and the long-term incentive plan of YOU.

Trade mining: Users can earn rewards by trading on YouSwap, which provides users with a small rebate and incentivises user loyalty to the YouSwap platform.

Voting: Users who hold YOU can initiate token listing proposals by voting or mortgage mechanisms.

Repurchase/Destruction: The transaction amount charged for handling fees (0.3%) are used entirely for repurchase and destruction of YOU, allowing long-term token holders to enjoy a token deflationary appreciation bonus.

Fundraising tokens: Similar to the ICO on Ethereum, YOU has an option for token-based fundraising on the dApp CoinStarter (IDO/ISO) on the YouSwap BoomBox platform, so its value will follow the respective IDOs (Initial DeFi Offering).

Gold shovel for mining liquidity: Users who only hold YOU can obtain staking rewards by providing liquidity to the single token liquidity pool of YOU.

As a multi-chain project, YouSwap currently supports Ethereum, HECO, and BSC chains. YouSwap maintains their YOU token value through a production reduction system. For instance, once the daily transaction fee on YouSwap reaches 500 USDT, the platform will start to automatically repurchase and destroy YOU tokens, by means of transfer to a black hole address. The first phase of the production reduction system ensures that when 3.6 million pieces of YOU are produced on each YouSwap chain, the production will be decreased.

During the Daybreak period (months 4-12), the proportion of monthly mining is reduced from 4% from the Genesis period (months 1-3) to 3%. Users can anticipate the earliest production cut is expected to be from late June to early July with the first reduction starting on the Ethereum chain, followed by the HECO chain, and finally the BSC chain. The steps of repurchase, destruction and production reduction of YOU tokens are carried out according to the data on each chain.

Data of each existing YouSwap chain can be seen below:

YouSwap’s TVL on HECO chain is currently at 7.4 million USD and the total repurchase and destruction have reached 454,292.52 YOU tokens. With an operating timeframe of less than 3 months after launch, the numbers as seen above are considered to be impressive.

The TVL for YouSwap’s BSC chain is at 1.3 million USD and the total repurchase and destruction reached 44,405.515 YOU tokens. As of now, YouSwap’s presence on BSC chain is insufficient compared to the huge following liquidity and volume on the Binance Smart Chain. Should YouSwap aim for a breakthrough on BSC, more exposure and market presence is required. 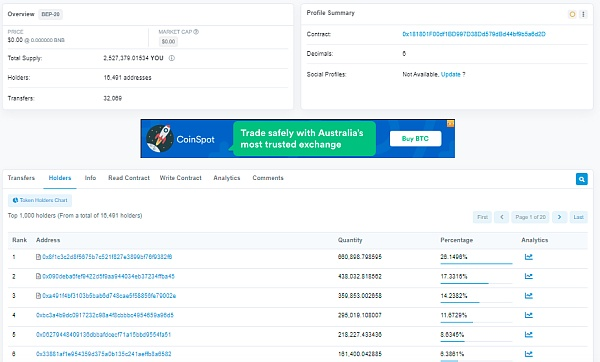 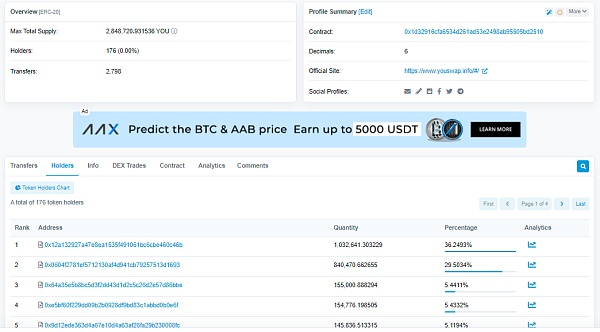 Looking at the official YouSwap community channels, the YouSwap project has been online for 2 months and their market performance has been steadily increasing with relatively high community support.

Compared to the confusing short-term dip, the long-term trend of DeFi is actually very clear. The DeFi market is very flexible and has huge long-term growth potential. In the very near future, DeFi platforms will expand to have many more innovative products, growth industries, and it is expected that competition will be increasingly fierce and exciting.

YouSwap, as a composite DEX positioning the entire DeFi ecosystem, has developed fast project operations. Following project online status on March 26, YouSwap has grown rapidly in terms of its TVL, number of YOU holders, number of transactions and number of community fans within 3 months. Ranking 11th on HECO DEX index and achieving a collaboration with an official event with HECO, YouSwap can be regarded as a small, but well-prepared DEX in the DeFi atmosphere.

Coming in June-July, a major milestone will be determined on YouSwap. The first phase of output reduction, continuous repurchase and destruction of YOU tokens will be executed. For those still curious, check out YouSwap at about.youswap.com 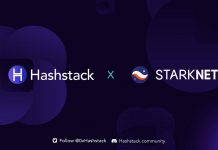 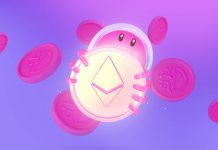 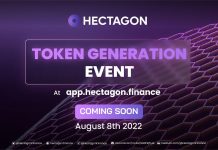