The Ledger hardware wallet is one of the better cryptocurrency storage solutions available on the market today. It provides customers with a secure digital ecosystem that is not connected to the internet at any given time. Over the past few months, Ledger has begun introducing support for additional cryptocurrencies with the latest batch of coins including the likes of VeChain, RSK, Particl, and a few others.

For users of alternative cryptocurrencies, finding a hardware wallet that is capable of supporting their favorite alt-coins can be a very big problem. Not too many manufacturers delve deep into smaller-cap altcoin support, mainly because these projects are often abandoned within the first year of their existence.

Ledger is trying to do things a bit differently in this regard, which can only be considered to be a good thing.

Over the past few months, the company has made it clear that it plans on supporting various altcoins moving forward. To do so, the firm has launched the Ledger Live application, which replaces the traditional plugins for one’s Chrome browser. The Ledger Live app is a collection of third-party software which can benefit from the functionality of the Nano S hardware wallet.

As these third-party applications can be submitted by developers of various altcoins, it has become relatively easy for such creators to have their coins supported by the Ledger Nano S.

However, with that being said, the French manufacturer will still vet all of these submitted applications to avoid any real issues from occurring later on. 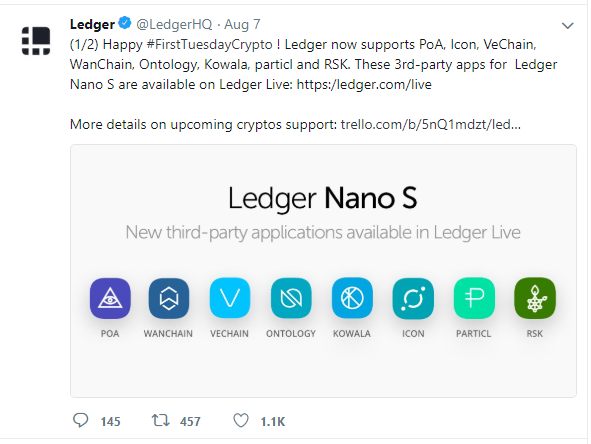 Among the newly supported currencies are RSK, Particl, ICON, VeChain, and WanChain. All of these projects are relatively well-known in the cryptocurrency industry. Smaller currencies such as PoA, Ontology, and Kowala are also supported through this desktop interface.

Hardware wallet support for cryptocurrencies is a powerful trend that cannot be ignored. Consumers need more security when it comes to storing their coins in a safe and secure manner. Keeping money on exchanges is asking for trouble, and the Ledger Nano S is affordable enough to make for a valid alternative. With additional support for more tokens and altcoins, Ledger Live is quickly becoming the go-to solution for safe cryptocurrency storage for both novice and veteran cryptocurrency users.