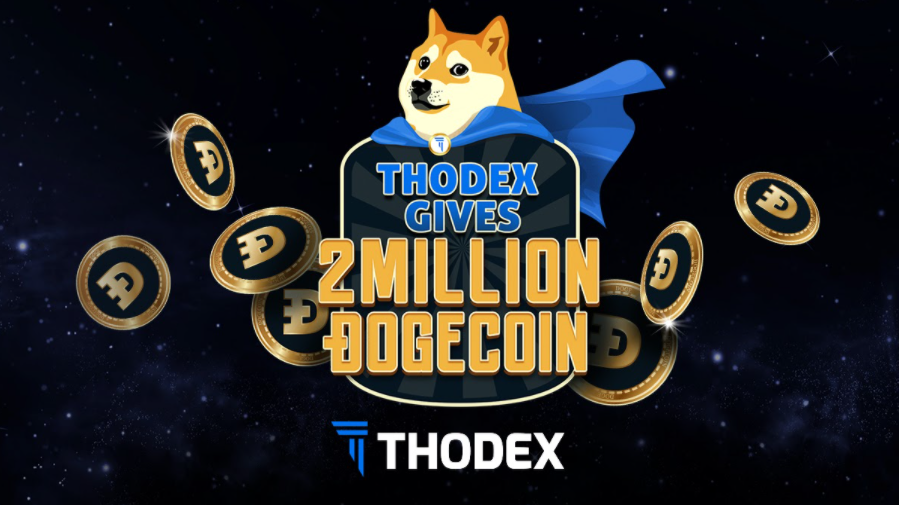 What’s better than crypto? Free crypto! Turkish run leading THODEX crypto exchange is announcing a month long campaign for new traders to earn up to 2 million DOGE in total by simply registering on the exchange.

THODEX has recently celebrated its fourth anniversary. The cryptocurrency exchange went all out and gave away hundreds of gifts in a raffle that had iPhones, PlayStation 4s and even a rare Porsche Panamera. Continuing its roll of promotions, THODEX has decided to give away 2 million Dogecoins for new traders.

The campaign by THODEX will run for a month, from 15th of March until 15th of April, 2021. All users newcomers during this time will be eligible for the free DOGE. Unlike other exchanges that compel their users to trade in high volumes to be eligible, THODEX does away with the high frequency trading model. The only rules are:

THODEX was founded 4 years ago in Turkey, one of the hotbeds of crypto adoption and usage in the geographical area. Since its launch, the crypto exchange platform has become very popular in the country and with its recent approved license from USA based FinCen MSB, it has started to offer its trading services on a global scale.

THODEX has set itself apart from other, more established and larger crypto exchanges with its range of user oriented services, such as:

Out of the many cryptocurrencies that THODEX features, it put careful consideration and eventually selected Dogecoin. DOGE has the potential to be one of the main altcoins in the near future. Kicked off in 2013 as an inside joke, the Dogecoin is named after the famous Doge meme, featuring the likeable cute dog on its logo. The casually built token turned out to be very popular and has a very strong fan following. Dogecoin has also caught the eyes of the big players, notably Elon Musk who has a history of tweeting in favor of it.

The coin isn’t small though, with it being in the top 15 of all the coins and tokens listed on CoinMarketCap and with more than $7 billion in circulation, it is used regularly all over the world.

Even with only 4 years in existence, THODEX has gained by leaps and bounds, showing that all it takes is a little bit of courage, innovation and passion to stand among the big players and be successful. The exchange sets itself apart by having NO fee on trading with USDT and BTC, with only a minor 0.1% if using Turkish Lira.